On the third day of our trip to Seattle, we stumbled across the Waterfront and Westlake Center.

Our flight back is at five the in evening. Naturally we checked out of the hotel at nine so we could have time to take a last, long look at the city we’ve come to love. While we were walking down the streets, I caught a glimpse of the ocean in the distance. Now we have heard of the Waterfront and the infamous Seattle Great Wheel (who hasn’t?) and we decided to take a walk by the ocean. Lugging our bag around was a challenge, especially when we climbed the stairs towards Pike Place Market, but the view was worth every labored breath and tired limb. 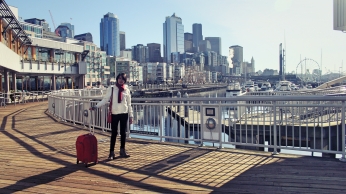 After saying goodbye to Pike Market Place, we went to the train station to get back to the Airport. On the way there, we stumbled upon the Washington State Convention Center and the many shops along Pike Street. We found a lovely mall called Westlake Center where we spent our time looking at different things.

For those who are looking for special gifts, go to the first floor of Westlake Center. There is a shop called Made in Washington that sells simply wonderful things. Their chocolate is amazing, and only fifty cents each! I bought some for myself to eat on the way to the airport. 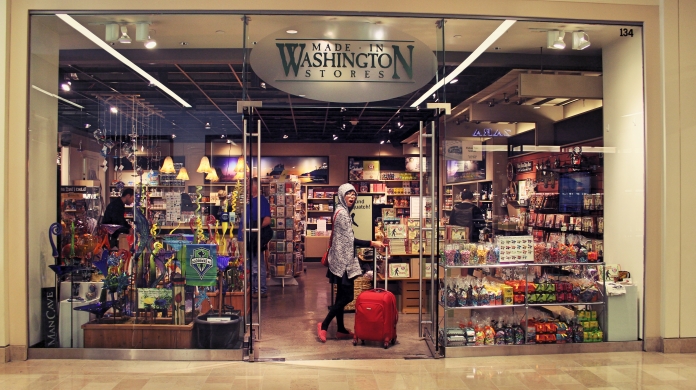 Made in Washington store

At the train station, we met a security guard called Pace. He was originally from Ohio and moved to Seattle a few years ago. He said that Seattle was, in his opinion, one of the best cities in the United States. I have to agree with him.

There are still plenty of places that we have yet to explore in Seattle. We have but scraped the surface, and I look forward to returning and digging deeper into the city. If you have been to the many beautiful parks and museums, leave a comment below so I can check it out!