Boston is a city full of history. Even if you know nothing about American history, the buildings and the streets tell a story of a time long ago when the world was a very different place. What makes it special is that the city provides its visitors with the Freedom Trail…red bricks set into the streets, which one can follow to different locations important to Bostonian, and American, history. There were three museum sites in the Freedom Trail (Old South Meeting House, Old State House, and Paul Revere’s Home). You can buy each independently or buy all three in any one of these sites and get a small discount.

It is a beautiful gold-domed building at the edge of the Boston Commons. Inside, you can find murals depicting the history of Massachusetts, a lovely display of Bostonian (and American) flags throughout the ages, as well as rooms still used today to work on state-related matters. The Boston Commons is perhaps my favorite place in the city. At the end of the day, when we are finished with our explorations, we always find ourselves drifting to the Boston Commons. Stay tuned for a post talking more about Boston parks! 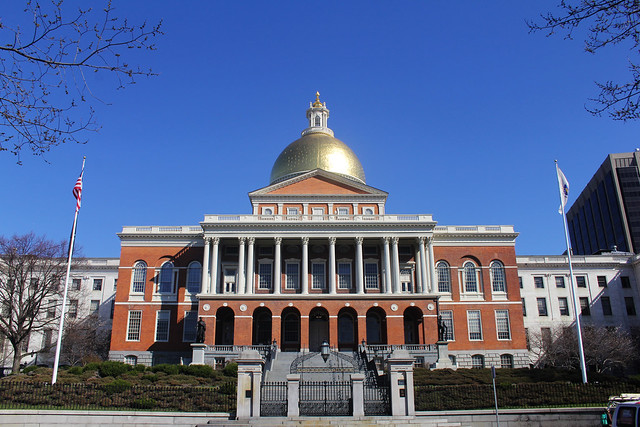 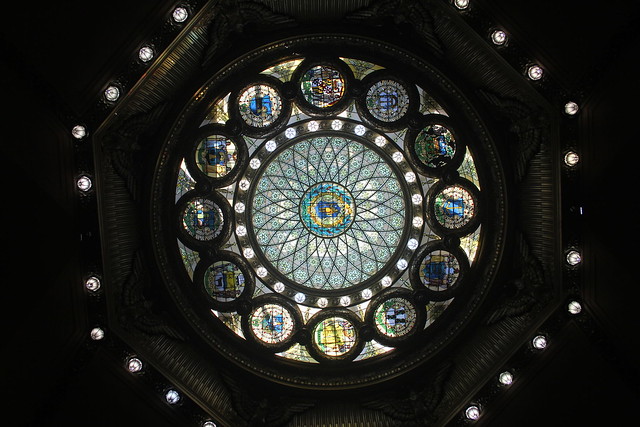 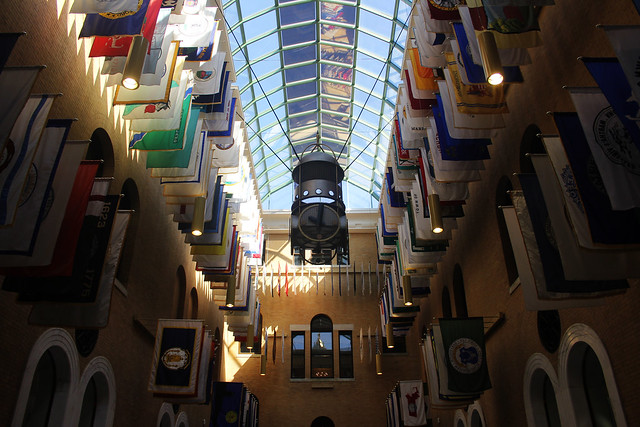 Park Street Church is a beautiful brick building dating back two hundred years ago, which still sounds its bells and welcomes churchgoers, located next to Granary Burying Ground. While we were at the Granary Burying Ground, there was a tour of schoolchildren who were studying the history of Boston. The tour leader wore old-fashioned clothes and pointed out some of the more notable burials, including John Hancock and Paul Revere. She was kind enough to let us tag along to King’s Chapel Burial ground, the oldest burial ground in Boston, before we parted ways. 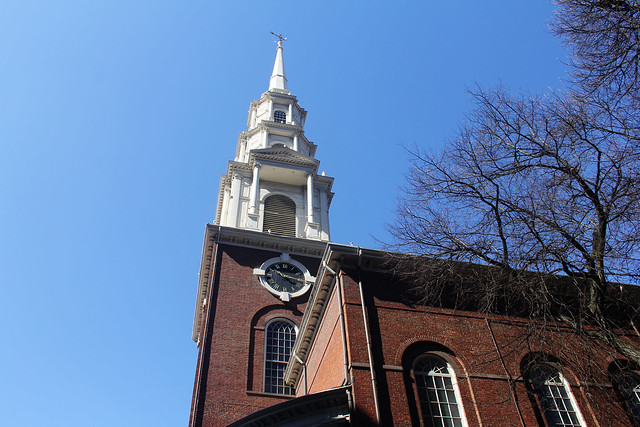 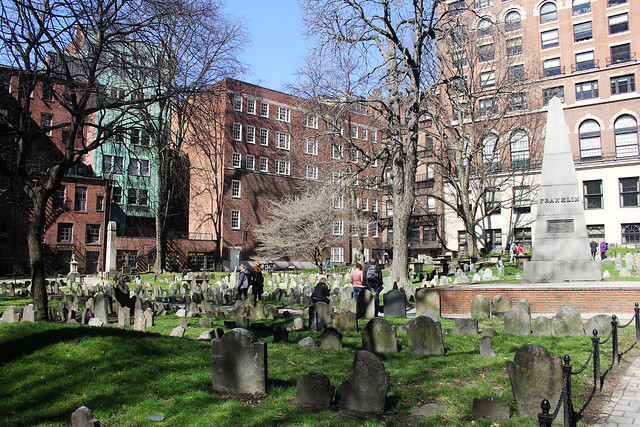 The Old South Meeting House was where Bostonians met to talk about and debate policies. Inside were rows after rows of white, small cubicles where people sat down. There was not much to see, but the building itself was marvelous. It was not hard to imagine the room filled with people from the past discussing things that would, a hundred years later, become materials found in history books. 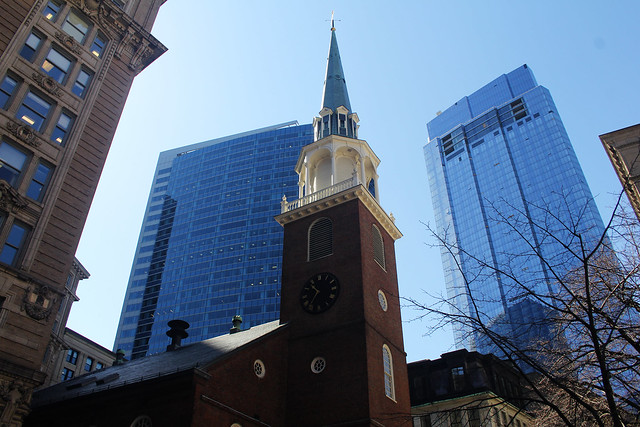 The Old State House is the center of civic discussion that would lead to the War for Independence. It is also the site of the Boston Massacre. In 1776, the Old State House was where the Declaration of Independence was first read to the people of Boston. When Queen Elizabeth II visited the United States to celebrate the US’s bicentenary, she greeted the people of Boston from the Old State House’s balcony. If you are interested in American history, take a look at the museum inside. It is a different feeling when you are reading from a textbook and when you are standing on the actual spot of the historical moments talked about on the displays. 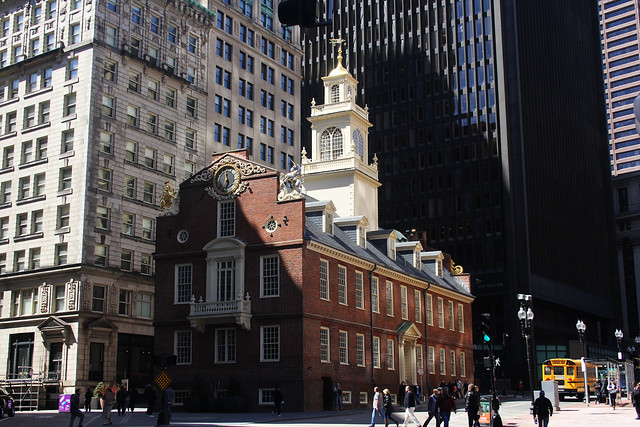 Faneuil Hall is home to many stores and shops on its first floor. On both sides stood the North Market and the South Market, which have even more stores. On the second floor is a beautiful hall that is open to public and often used for events. Like the Boston Commons, Faneuil Hall is where we would drift towards at the end of the day. 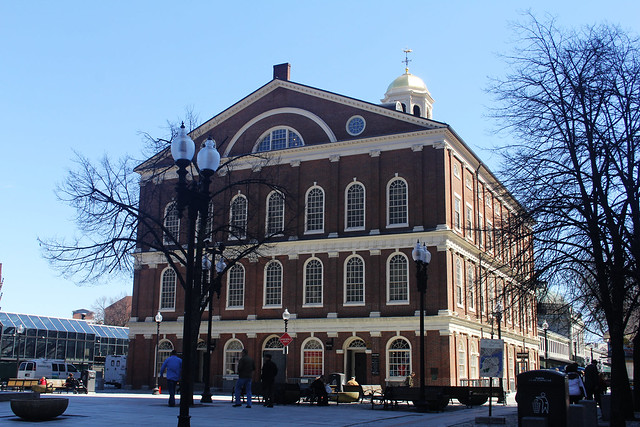 The Paul Revere House is located in North End, one of Boston’s famous neighborhoods. It is an example of a typical colonial Boston home. From the small, tinted windows by the stairs, I saw a couple of children playing in the yard across the street. For a moment, it truly felt as though I was back in time. 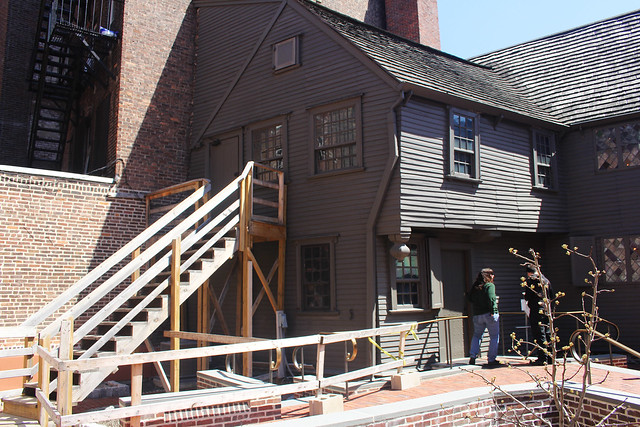 The first view we had of the Old North Church was a beautiful white spire behind the statue of Paul Revere. The gates open to a lovely little garden surrounded by brick walls, budding flower patches, and benches. There was a display of thousands of military dog tags to commemorate soldiers lost because of wars in recent years. We sat down on the benches and spent some time just listening to the birds and the peaceful quiet, away from the bustles of downtown Boston. 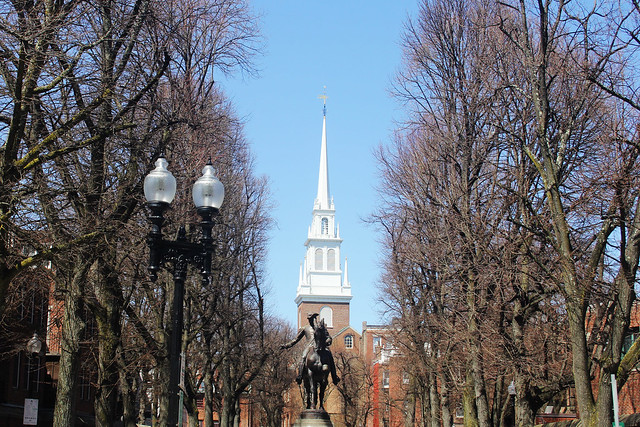 We did not spend much time in Copp’s Hill Burying Ground, but we overheard someone saying that it was home to thousands of unmarked graves and that it used to be a pasture. It is also where the British transport their artillery to Charleston for the Battle of Bunker Hill during the Revolutionary War. 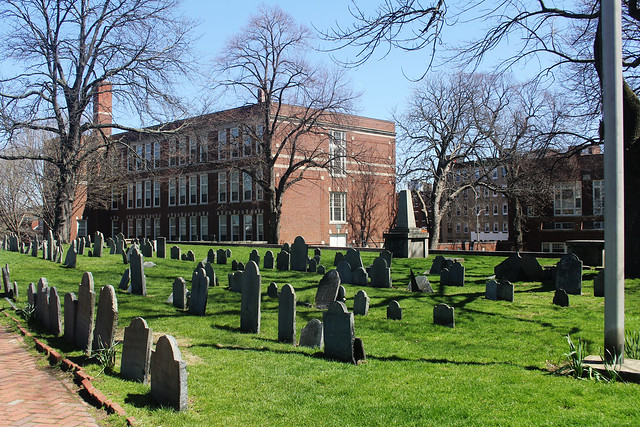 These two final stops are located across the Charles River. It is, however, still within walking distance. The USS Constitution is the oldest commissioned warship and it was under repair when we were there. The Bunker Hill Monument commemorates the Battle of Bunker Hill, in which Bostonians stood against more well-trained British soldiers. 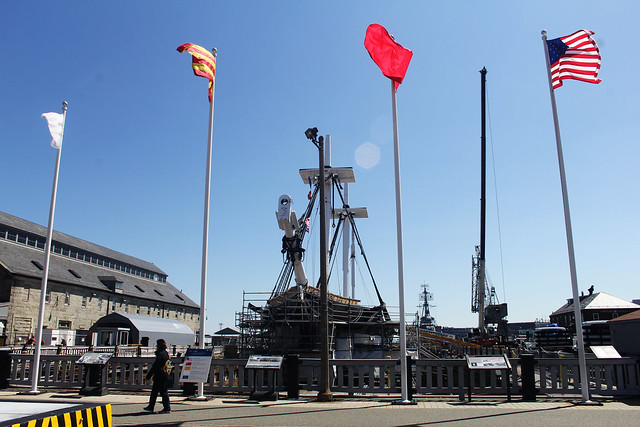 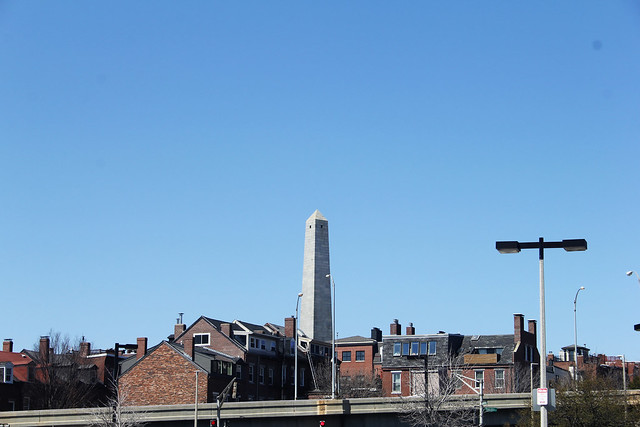 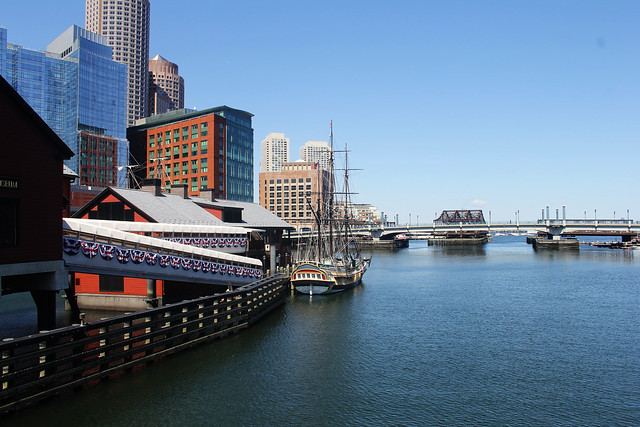 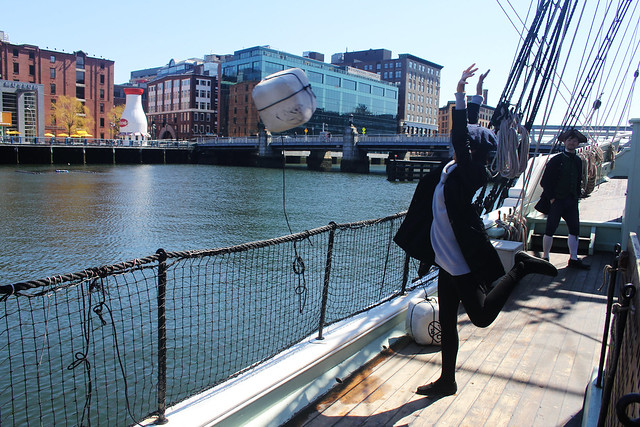 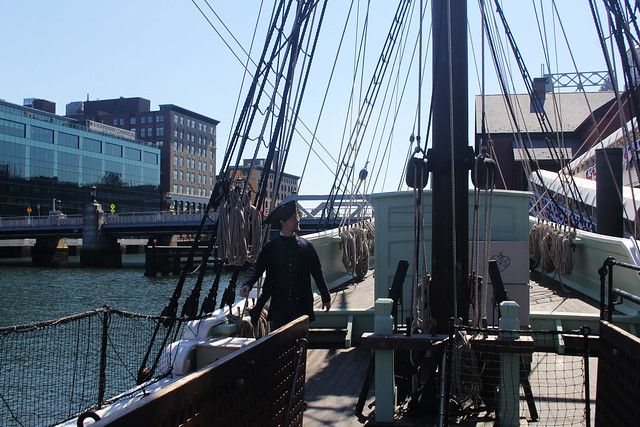