A medina is an older part of the city, usually walled with maze-like streets. The Marrakech Medina is a UNESCO World Heritage Site; it is full of history, it is artful, and it is fascinating. It was almost always full of people, no matter what time of day. And while most of the buildings look the same from the outside, the walls hold numerous treasures inside for those who are looking for them.

Since the medina is a sprawling area in which one could get hopelessly lost, it is good to have some kind of idea of where to go. The night before we explored it, we got ourselves a map of the city (available in hotels, tourist shops, and even some restaurants). We spent about an hour on our beds, circling the places we wanted to visit…and there were plenty of them. The streets of the medina were too numerous and too complicated to memorize, so we made sure we have our cell phones. 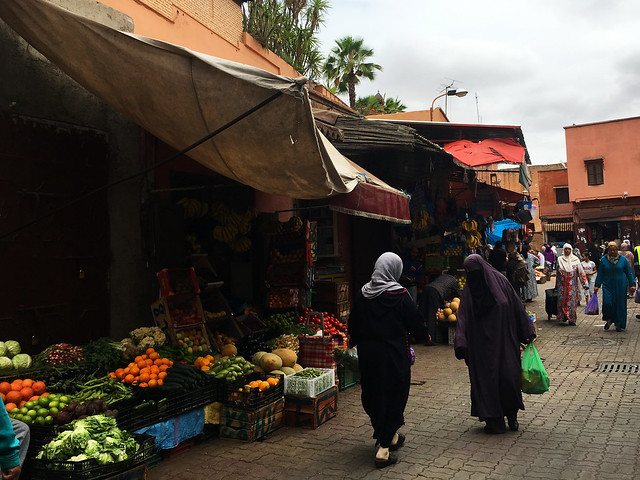 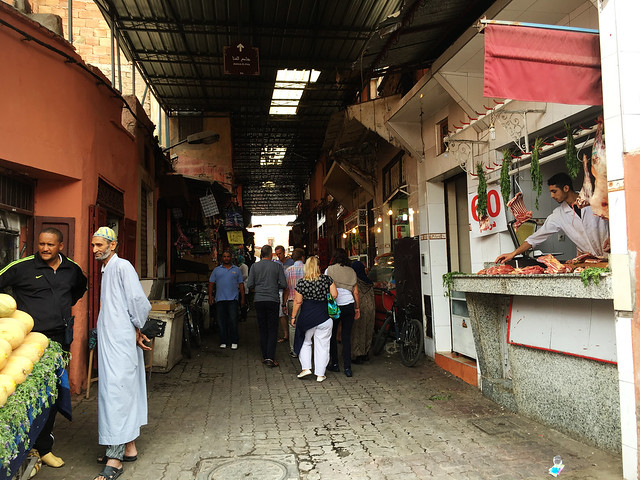 The next day, we went to our first stop, the Majorelle Garden. With its distinct Majorelle blue hues, clashing with bright red and yellow, the garden has a very unique look. The garden house houses the Islamic Art Museum of Marrakech and there is one room filled with Yves Saint-Laurent’s sketches (he was an owner of the garden). There were many fountains and cacti; birds flitted down to rest under the shades of bamboo trees from time to time. Take plenty of pictures…they simply look magical. 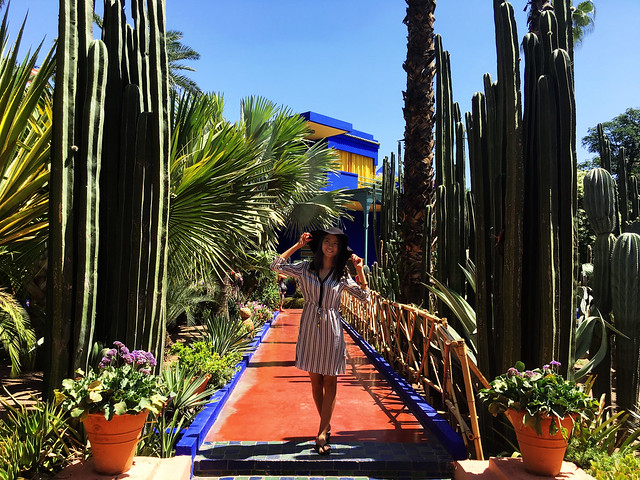 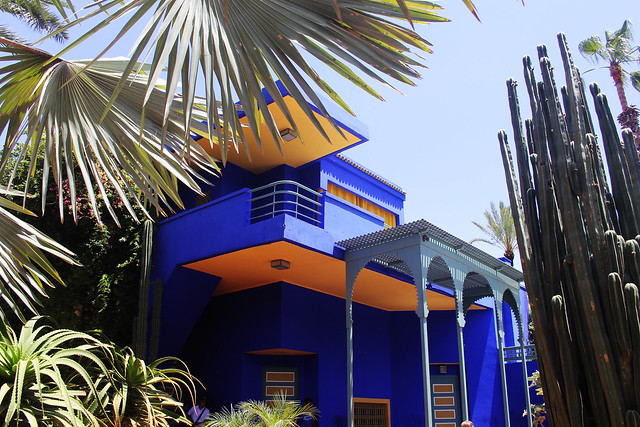 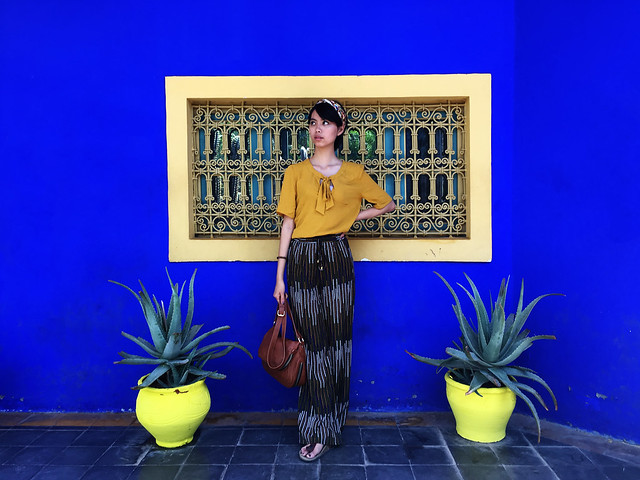 Our second destination was the Menara Gardens.  It is an ancient olive grove with a pool in the middle (used for irrigation), and a pavilion for resting. When we went there, unfortunately the water had been drained (in the summer, it gets frightfully hot and dry). We almost went out disappointed, but a worker there pointed us to the pavilion and a set of stairs we had not seen before. The second floor had a beautiful ceiling, a wonderful view of the olive grove, and a cool breeze after the heat of the afternoon sun. 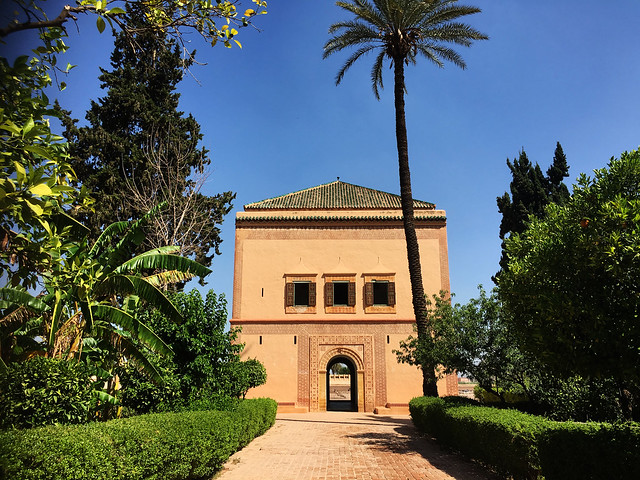 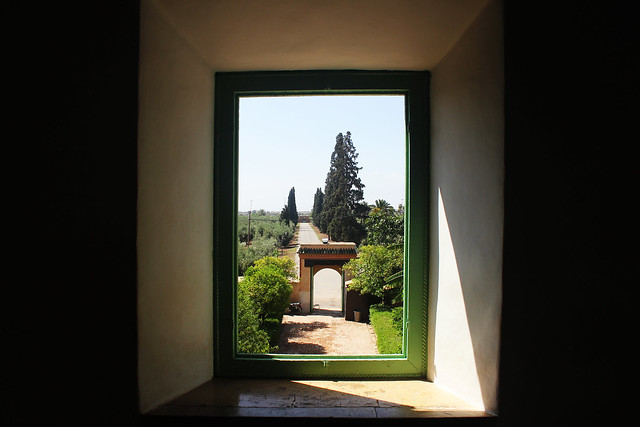 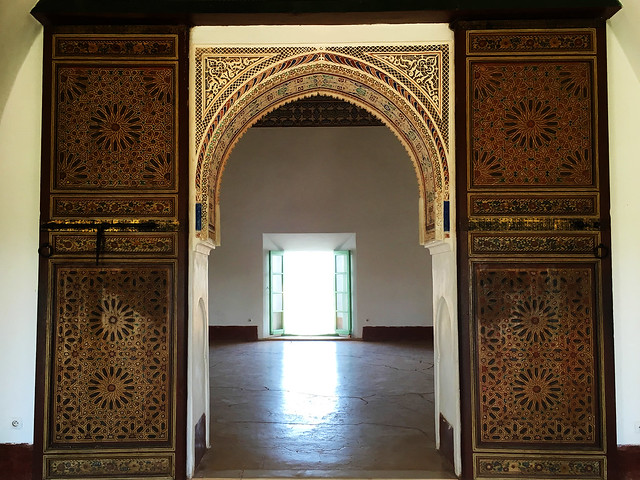 We had a very hard time finding the Ben Youssef Medersa, which was an Islamic-university-turned-museum. We passed it a few times without finding where the entrance was. We walked around and asked around, but still had no luck; tired, we decided to get some food. There was a sign for a restaurant, so we followed it, went inside a riad, climbed a few set of stairs, and found ourselves in a charming rooftop restaurant serving the best tajeen I’ve tasted yet. Looking out, I could see a building close by that may be the Medersa, so we asked the owner, who gave us directions. It turned out to be just next door, only the entrance was around a corner hidden from view.

It is hard to describe the feeling I got when I walked across the courtyard, then down the narrow halls. I could imagine students sitting on their quarters reading, or laying under the shade as they waited for a lecture. The mosque was spacious, quiet, and cool…we sat there for a while just drinking everything in. An old man told us about how the intricate designs on the walls were quotes from the Qur’an, and they were carved straight into the stone or wood. He explained how the shape of the mosque would echo the voice of the imam as they prepared for prayers. 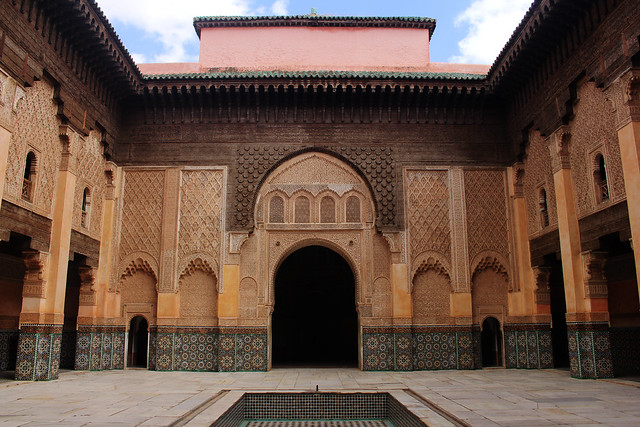 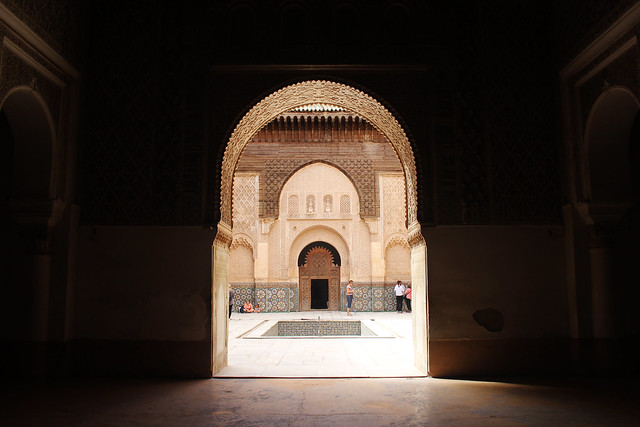 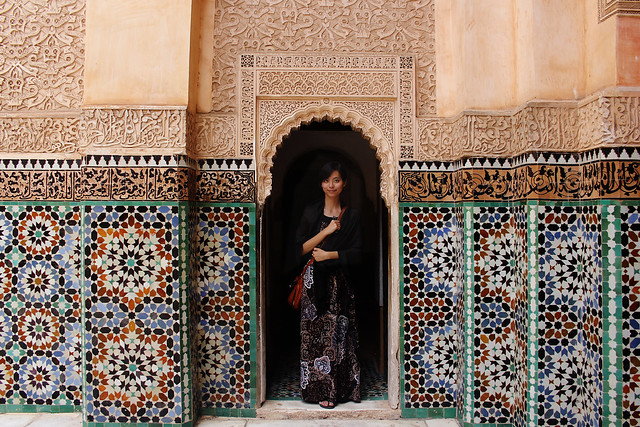 We also visited the Saadian tombs. To get in, we had to pass through a narrow corridor; the walls close to our sides and the sliver of sunlight made it seem mysterious. The mausoleum, with its magnificent woodwork and calligraphy, houses the grave of members of the Saadian dynasty. In the gardens outside were graves of soldiers and servants. The Saadian tombs smelled faintly of flowers and rosemary, which grew alongside the paths. There were many cats resting under the shade of trees; pigeons made their homes inside the walls that surround the area. 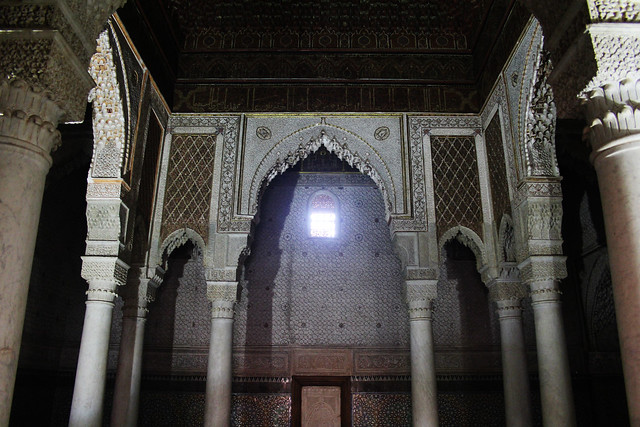 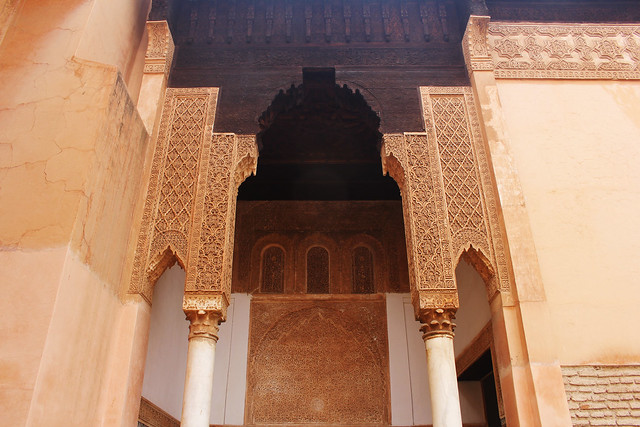 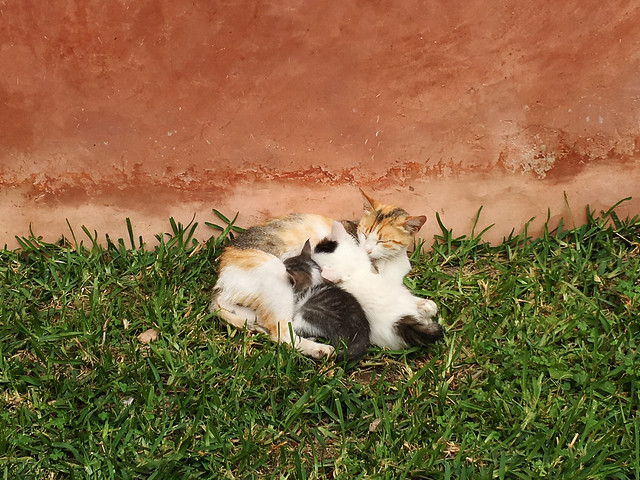 To get to the Bahia Palace, we had to cross stalls selling fresh fruits, herbs, and even a butcher shop. The world outside was bustling with  the sound of motor engines and multiple voices talking at the same time, but as soon as we stepped inside the gates of the palace, the noise faded away. There was the scent of flowers and the trickling of water. The palace has wonderful carved wood arches, calligraphy, perfectly symmetrical building placement, intricate ceilings, and the most amazing tiles. 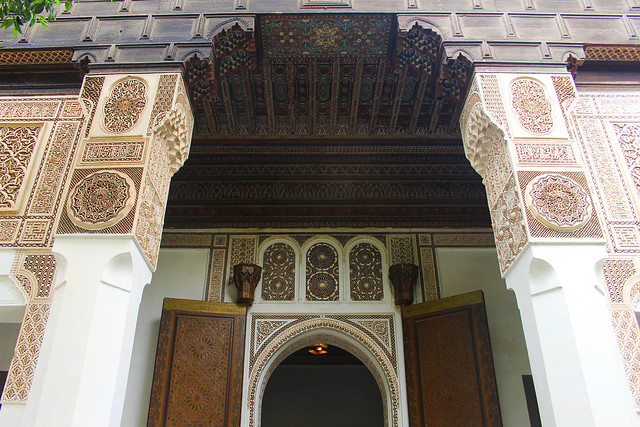 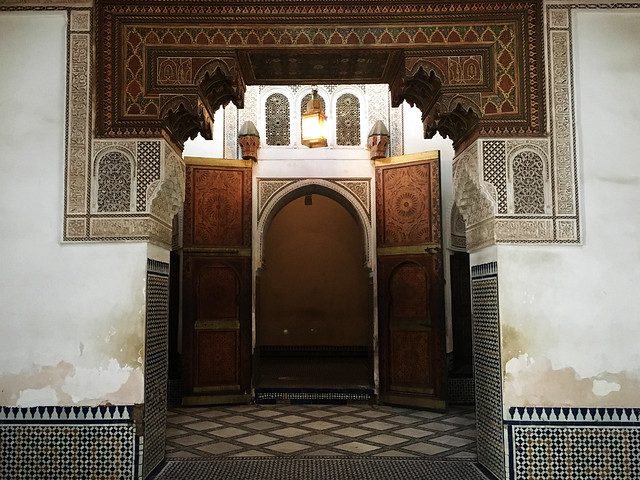 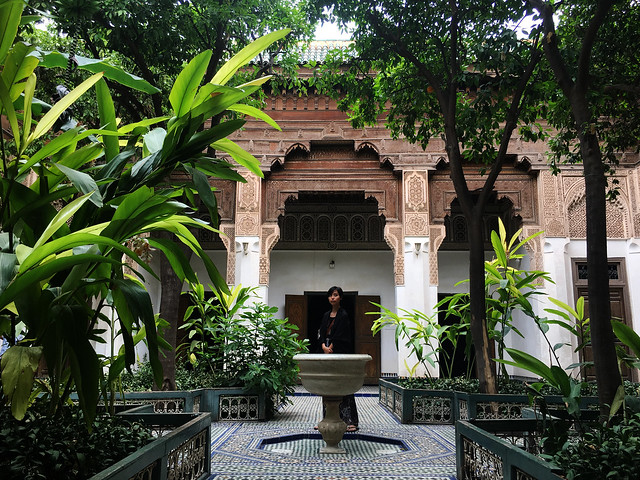 The last place we visited was the Dar Si Said Museum, which showcases the arts and crafts of Marrakech. The objects on display were beautiful, but it was the garden that I absolutely loved. It was surrounded by the museum, away from the bustling city, and so quiet. Birds hid in the foliage…the only indication that they were there were their lilting chirps. The ceilings of the museum were lovely and intricate; make sure to look up when you visit. 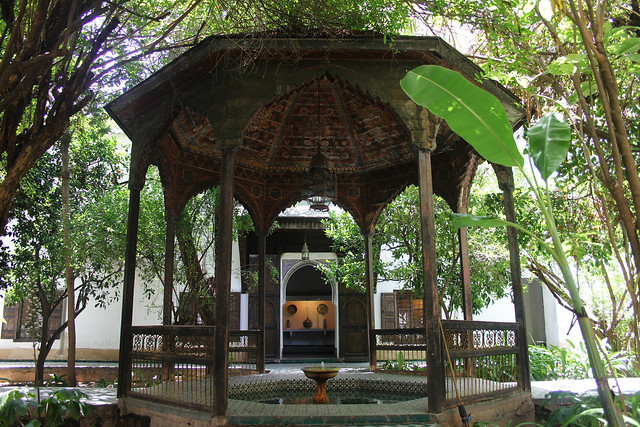 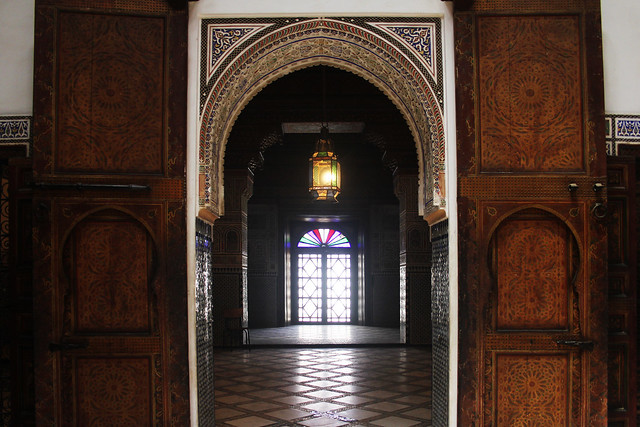 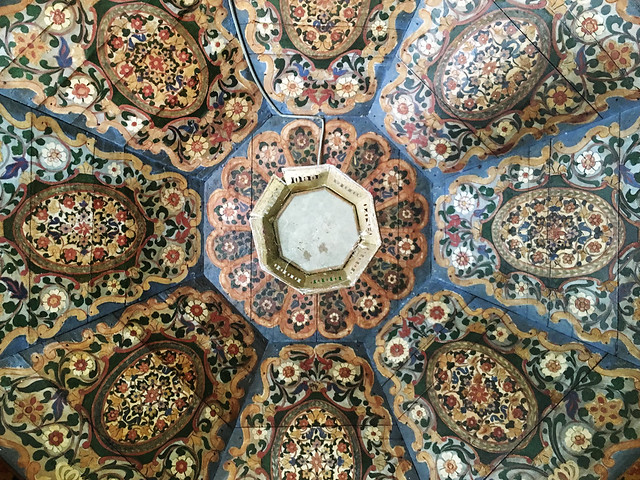 Talking about the medina, I will have to mention the famous Jemaa el-Fnaa quarters, the heart of Marrakech. Surrounding it were souks, or marketplaces, of different sizes (and prices). Read more about it here.

We also planned to see the Almoravid Koubba and the Baadi Palace, but both were closed the entire time we were there.

24 thoughts on “The Marrakech Medina”