Japan is famous around the world for its adherence to traditional values and very organized societal norms (we’ve seen it in action: on escalators, people automatically move to the left so that the right lane is open for rushing commuters) but some choose to follow an alternative lifestyle. Some of you may have seen pictures of Japanese teens in crazy clothes and make-up. The reality is not as extreme but they are around…in some places more than other.

Akihabara and Harajuku are the two places where Japan’s various alternative lifestyles come together. We visited these neighborhoods not really knowing what to expect; what we saw there blew us away. Each corner offers us a different look, a different feeling. Trying to make sense of what we encountered was futile, so we shed our questions behind and just went with the flow.

It was plain crazy but also so much fun…try visiting, even if you are hesitant. You won’t regret it.

Takeshita Street, the most famous shopping street in Harajuku, was jam-packed full of dark-haired ‘average’ Japanese high schoolers, cliques of three to ten decked in various clothing styles, girls in maid outfits shouting for attention for their theme cafés and tourists trying not to get lost in the vortex of madness. The sea of people pushed us along and we had no choice but to follow; we’re glad we didn’t let ourselves be discouraged by the crowd because it was in there that we saw the most amazing little shops, selling everything from socks with animal ears to mile-high cotton candy. The things they offered at Takeshita Street are unique and so cute; perhaps that’s what differentiates and elevates them from other parts of Harajuku. 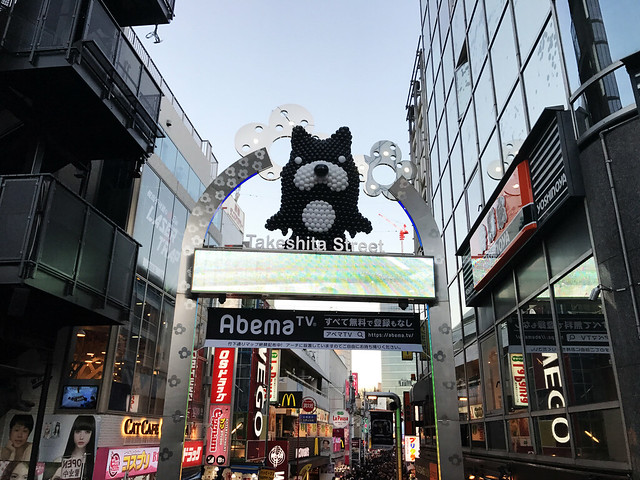 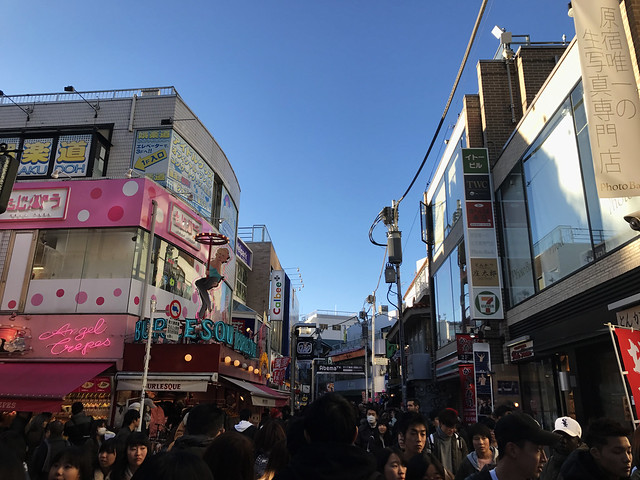 We visited the famous Kawaii Monster Café. The hour-long wait was worth it…while the food was mediocre at best, the atmosphere was off the charts crazy. The moment we walked in, we saw an elevated platform dazzled in neon lights. It looked like a blend between a cake and a hat, with a couple of circus horses thrown in. Two girls and a guy dressed in colorful wigs and the strangest clothes we’ve ever seen were taking pictures with patrons while loud music blared in the background. Our lunch looked like cat food and slices of cake so colorful, they looked toxic. It’s no use trying to describe it…take a look at the pictures below and see for yourselves! 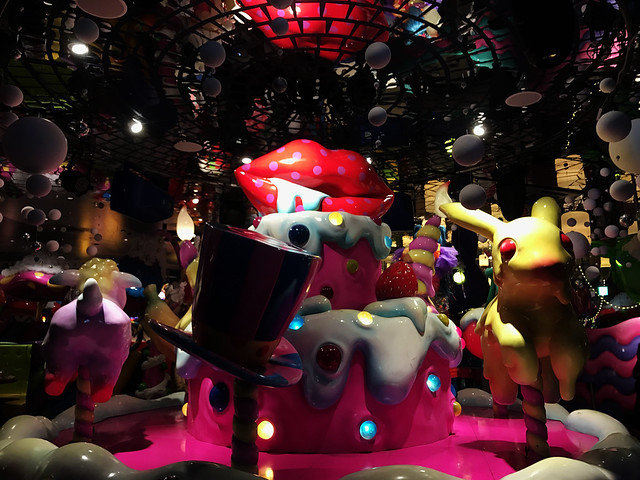 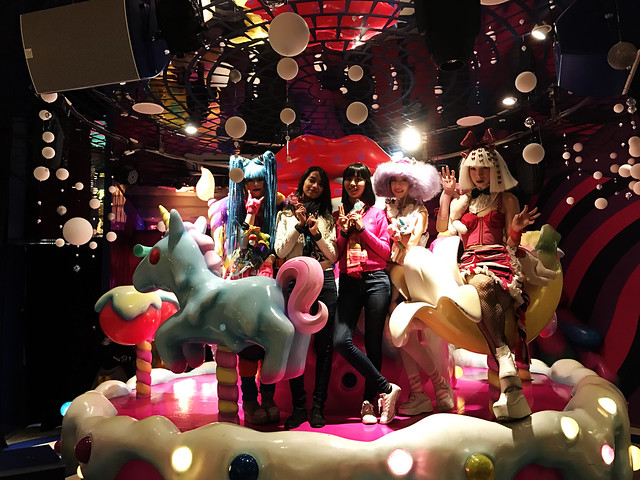 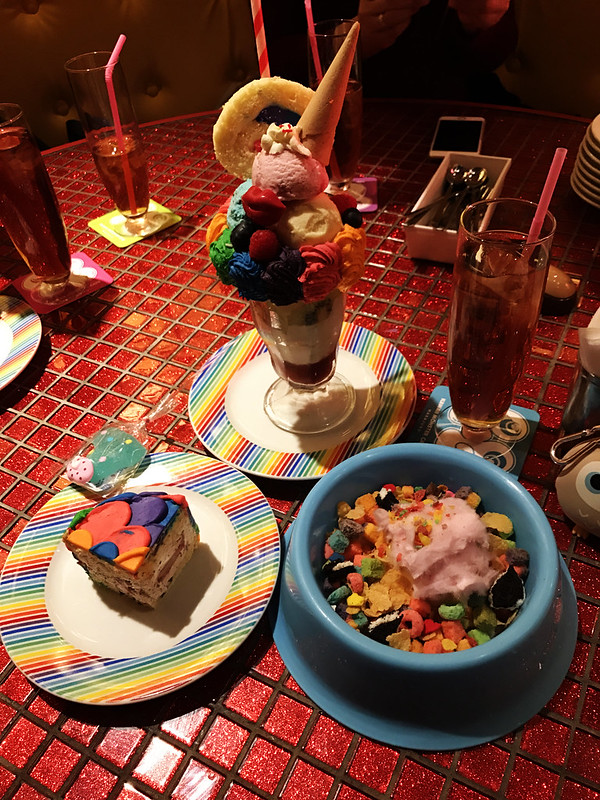 Before we dive into our experience in Akihabara, it’s important to know the concept of what the Japanese call otaku. An otaku is a huge fan of anime, manga and video games, often to the point of obsession. Akihabara is the hub for the otaku alternative lifestyle…and it shows. In this district, the characters and way of life that these fans long for are brought to life. 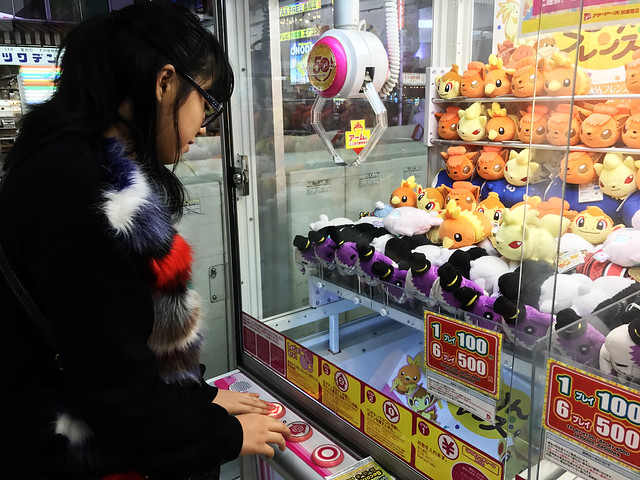 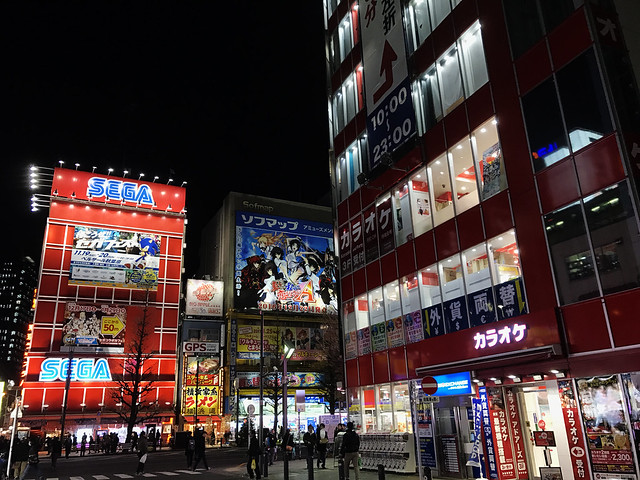 Billboards feature not human models but fictional characters or Akihabara-native girl band AKB48 (which had 48 members). Anime stores pepper the streets, some as small as a cellar and some six stories high. We explored one for an hour or two to find out what kind of things they sell there…it was extensive to say the least. We saw comic books, video games, DVDs, clothes, cutleries, figurines, key chains and dakimakura (large pillows for hugging with an anime character printed on the sheet, usually in suggestive poses). The top floor had a café with hosts dressed as famous anime characters; right outside was a jungle of cosplay materials for sale…wigs, clothes, accessories, plastic weapons, you name it. We instantly compared it to the anime conventions we often see in the United States. The conclusion? Japan’s cosplay culture is of a whole different caliber. 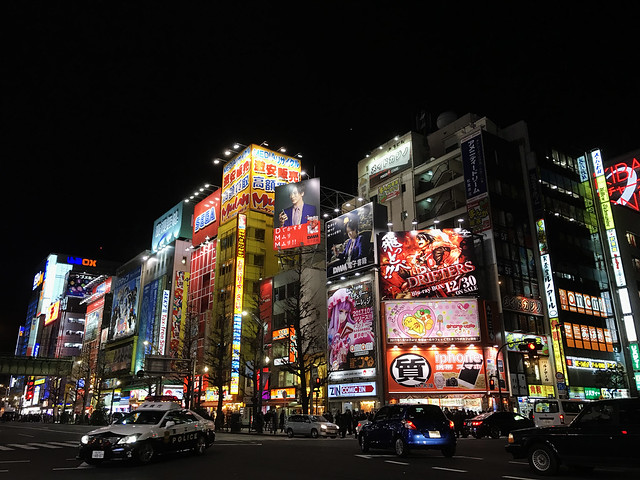 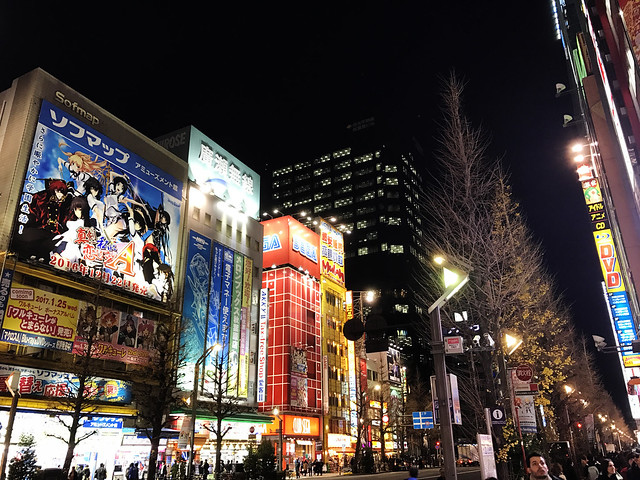 Walking down the street, you will find plenty of girls dressed in skimpy French maid outfits even in winter. They flashed beautiful smiles as people walk by, ready to link their arms and show you in at the slightest display of interest. Behold the Maid Café: it brings to live the fetishized image of the maid often found in anime, manga and video games. Waitresses act like customers’ maids in a private home, leading to a unique dining experience. Later we found that Akihabara is home to the first maid café in the world, Cure Maid Café.

Akihabara is not only famous for anime and gaming, but also its fixation on technology. We visited electronic-only stores that are more like shopping centers. Yodobashi Camera next to the Akihabara Station is eight stories tall. It sells everything from cameras to cutting-edge robot technology. We aren’t really techies, so we just sort of drifted around…but even with our untrained eyes, Yodobashi was a sight to behold. 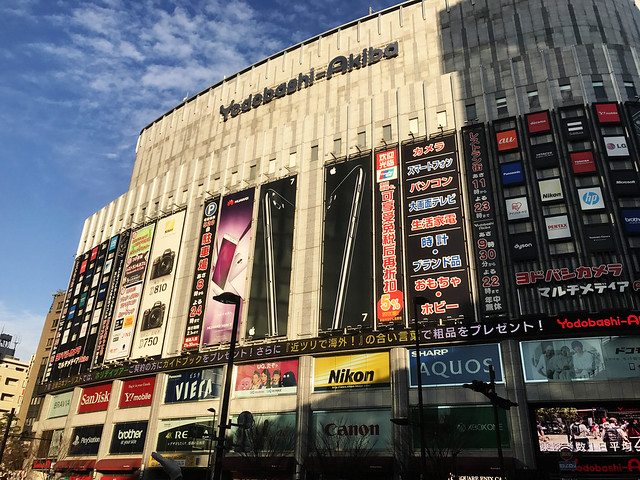 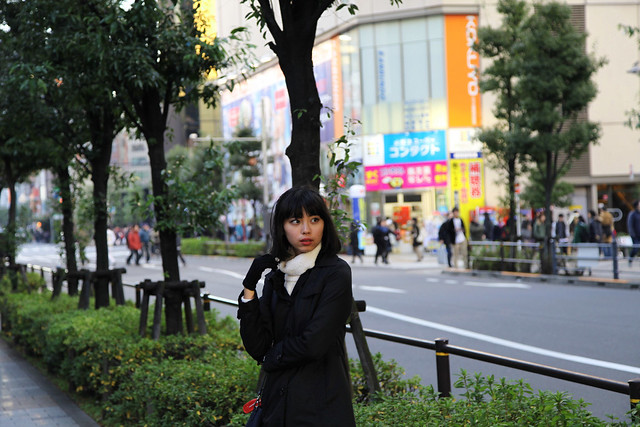 As the night came to a close, we saw a Mario Kart procession. The people were dressed as Mario Kart characters, hunched in their brightly-colored racing cars side-by-side with more common Toyotas. That scene sums up our visit to Akihabara: we were the Toyotas, these people were the Mario Kart crew, at home in the madness of it all. 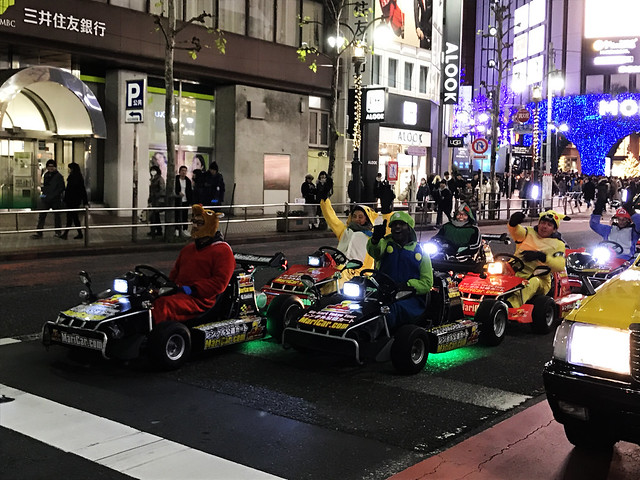