The Arashiyama Bamboo Grove is one of those places that you want to visit at the best time to make sure you get the full experience. The acres of bamboo forest, with a trail of gravel running through it like a ribbon, was as picturesque as picturesque can be…in other words, it was Instagram-worthy. Before we went, we heard stories about how it was always filled to the brim with tourists, making it nearly impossible to enjoy its beauty (which, to us, was best served with a side of solitude and quiet meditation).

Drawing from our magical experience hiking Mount Inari at dawn to escape the crowd, we figured: why not do the same thing again? After all, we want the freedom to walk without feeling like we were sardines in a can, to set up our camera on our own time and to experience the quiet magic of the bamboo grove. 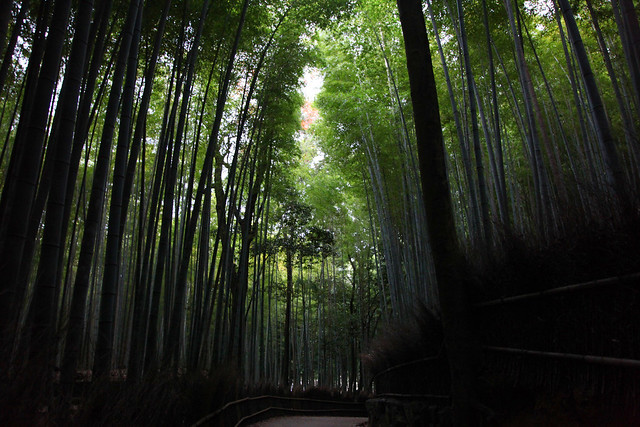 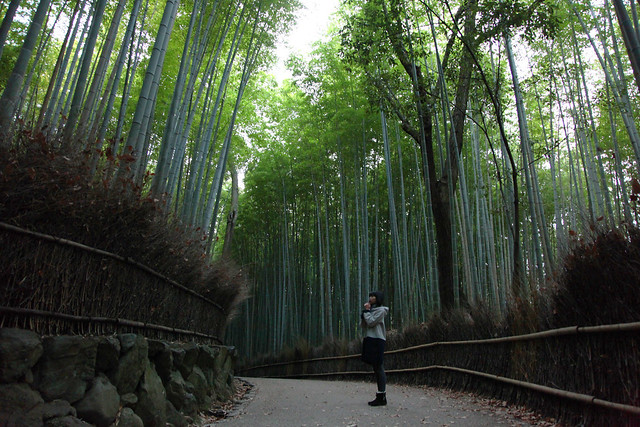 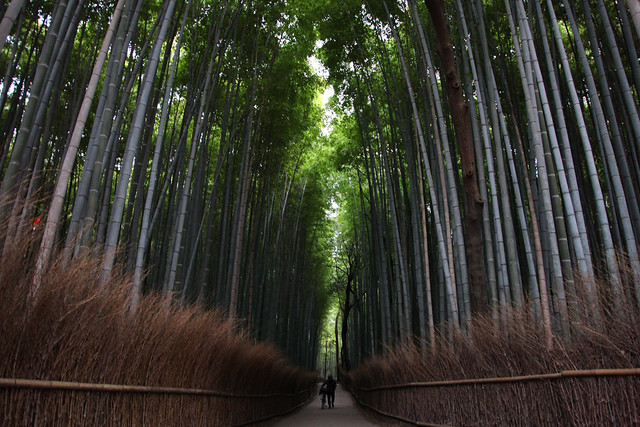 We arrived at the entrance of the forest at 6, when the sky was still peppered with stars and the village nearby hushed and dark. As we walked along the trail that led to the bamboo forest, we saw only two Japanese guys who obviously had the same idea as us (they brought large professional cameras, so they probably wanted to beat the crowd and snap a National Geographic-worthy picture).

We were surrounded on all sides by green bamboo walls, pressed so close together as they loomed toward the sky. The path ahead disappeared around a corner. For a moment, it felt as though the trees were closing in on us, trapping us in. It was dark and misty, the only light coming from a couple of old-fashioned lanterns that hailed mid-century Japan. If a ghost or one of Japan’s numerous kami materialized in front of us at that moment, it would not have been surprising. 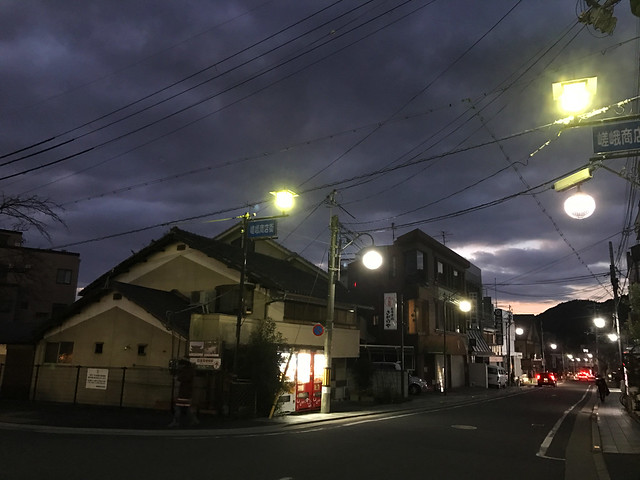 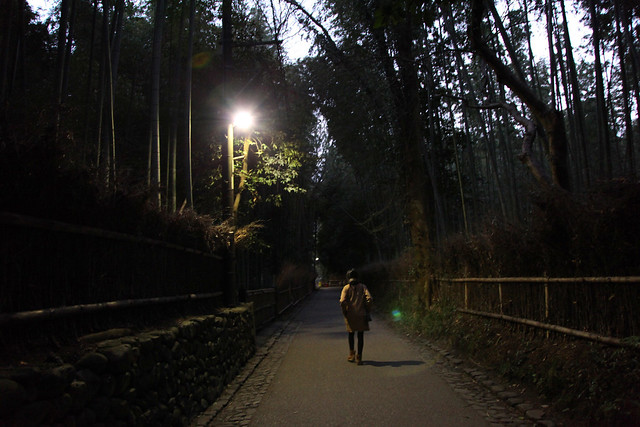 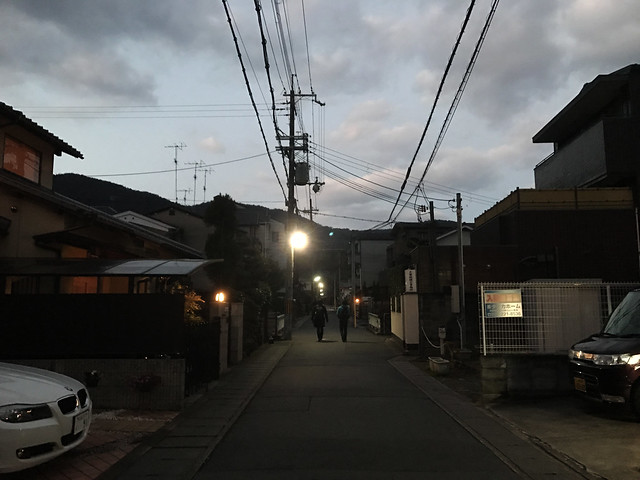 And it was quiet…so quiet that it felt almost solid. Each footstep rang loud and clear, each breeze sending the bamboo trees rustling in rhythmic, almost hypnotic fashion. We had never encountered such peace and awe in our lives (save for the day before when we hiked Mount Inari, and our adventures in the Sahara Desert).

As the sky lightened, moments before dawn, we reached the Okochi-Sanso Villa next to the forest. It was closed at that time but we were content just sitting on the ground, gazing at the trees around us. The forest had an eerie sort of beauty and we found ourselves shivering as we took in our surroundings (it was cold, of course, but the chills came from something else we couldn’t quite describe). As we waited for the sun to rise, we made conversation with the two photographers in very limited Japanese.

The sky grew brighter and brighter, and soon enough the sun was up. We pulled out our phones and camera, and started snapping pictures. The two guys we were with pointed us to a sight we would want to see: a lake along the trail, with neighborhoods on one side and the forest on the other, a natural and grand divider. 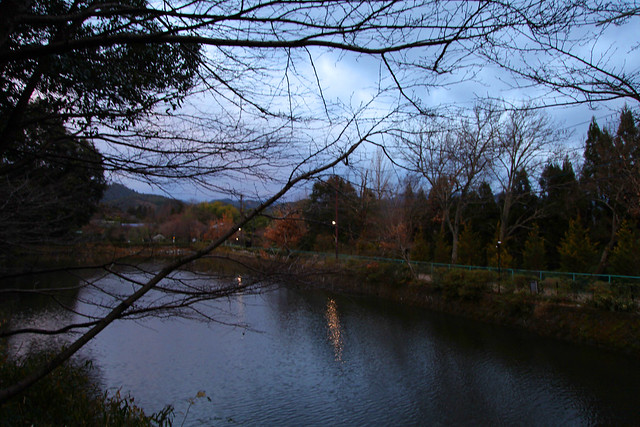 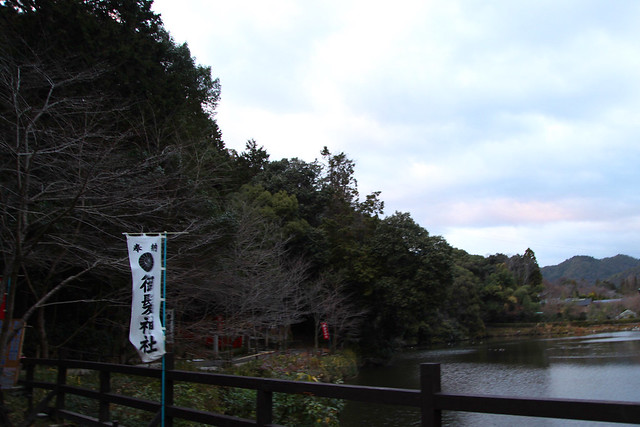 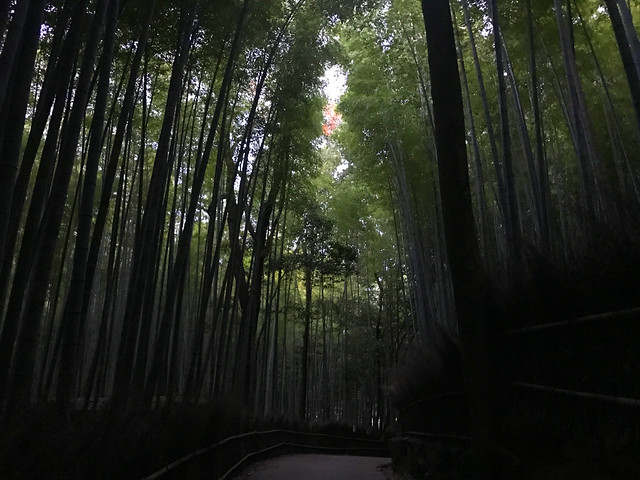 We ate the onigiri we bought at Kyoto train station earlier that morning and watched the ducks swimming on the water in silence. People passed by and bid us hello, goodbye, have a great time (all we understood in our very limited Japanese).

It was soon time to leave. We retraced our way back through the small path slicing the bamboo forest, long before the horde of tourists came. The village just woke up. A handful of people walked their dogs, students rushed to school, a young man helped his mother set up a croquette shop before going to university (and it was the best croquette we had in Japan). The train station was a small little thing with a corridor flanked with kimonos displayed on glass tubes. The trains were bright purple. 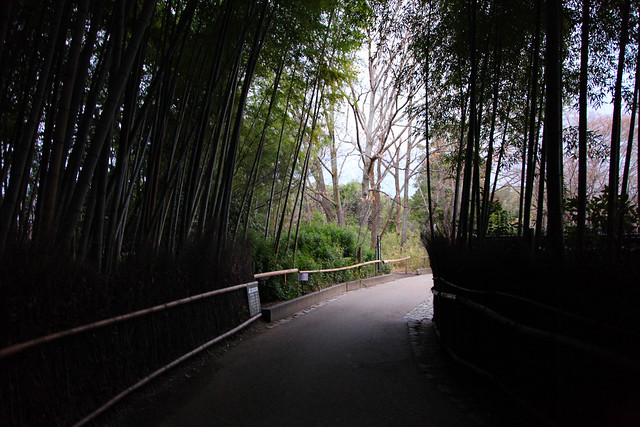 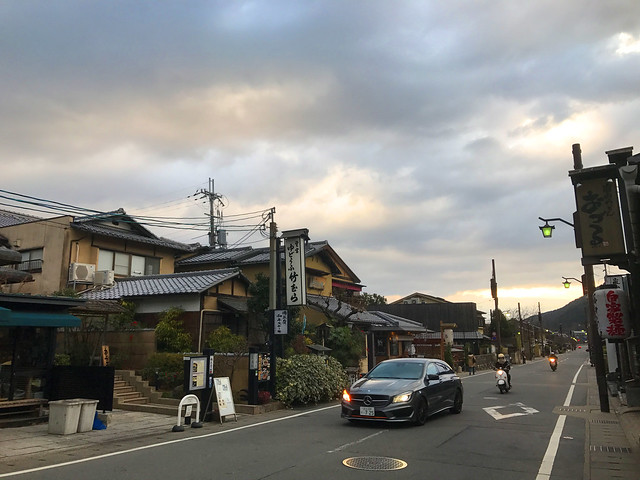 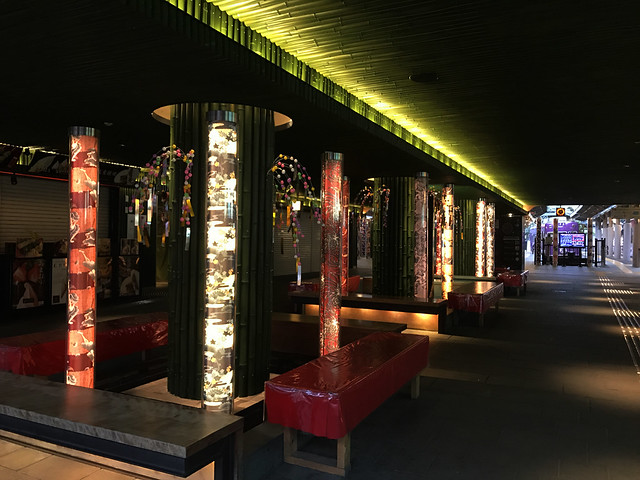 Once again we embarked on an adventure and concluded it before 10 in the morning. That same day we took Japan’s world-famous bullet train, the shinkansen, back to Tokyo. If the fact that you can enjoy a location without having to deal with the crowd isn’t good enough to convince you to start your day early, then think about this: by starting early, you would have doubled the time you have to explore!

13 thoughts on “The Bamboo Groves of Arashiyama”