Before we travel, we always make a list of places we want to visit. It changes every time. The unpredictable timing, the conversations we have, and the sudden glimpses of something interesting in the distance dictate where we actually go.

In Puerto Rico, we spent most of our time in Old San Juan. Equipped with our list, we set out as soon as we checked into our hotel (and dressed up – we had a beautiful first impression of Puerto Rico and wanted to return the favor). After lunch, we were wandering around the city when we met a fish-seller in front of a shop selling framed butterflies.

“Visiting?” he asked. We answered in the affirmative. He beamed when we said it was our first day in Puerto Rico. “You’ll want a great view of the city, so go to Bastion de las Palmas.”

We were curious but we also had to be cautious. He could see the concern in our faces and told us that he was a fish-seller on his way to a restaurant nearby.

“Thank you,” we said as he was leaving. We took his advice – and the view we had to start off our adventure was gloriously wonderful. The sea stretched out on one side, sparkling merrily under the sun. A garden sprawled underneath, and in the distance we could see the buildings of Old San Juan.

Here we have listed some of the places we visited.

The bastion was located on high ground, and once served as part of San Juan’s defensive city wall. There was a group of high school kids sitting on the wall and chatting. A couple leant together against the wall, watching birds fly across the landscape. A mother took a picture of her children posing reluctantly in front of a sign. There were many different people – tourists and locals, teenagers and the elderly, families and couples- all there to enjoy the view. 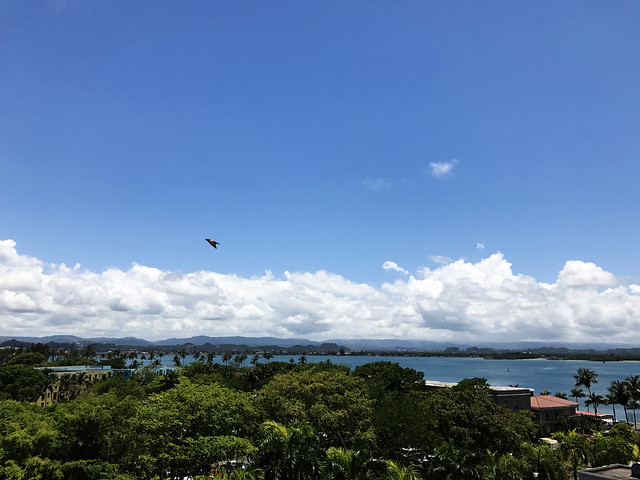 The fort was built by the Spanish over 250 years ago to defend San Juan. The major surviving parts of the fort made up the San Juan National Historic Site. It was a little scary to walk through the old dark tunnels and difficult to climb up the fort in the heat, but the view from above was worth the effort. From the lookout, we could see the sea as far as our eyes could see. We could imagine being there as defenders of San Juan, squinting out into the sea to see if there were enemies drawing near. 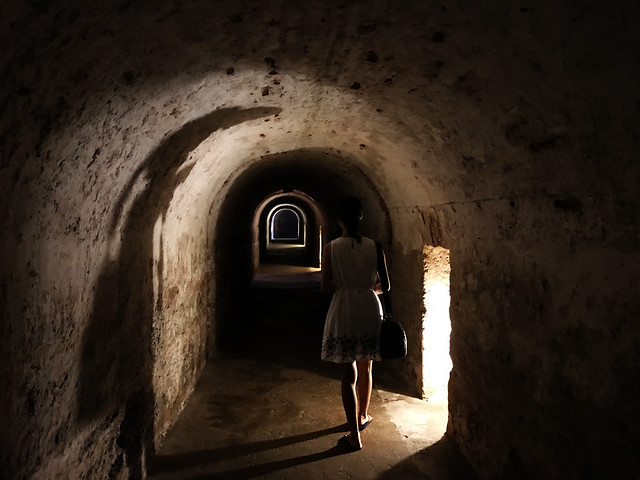 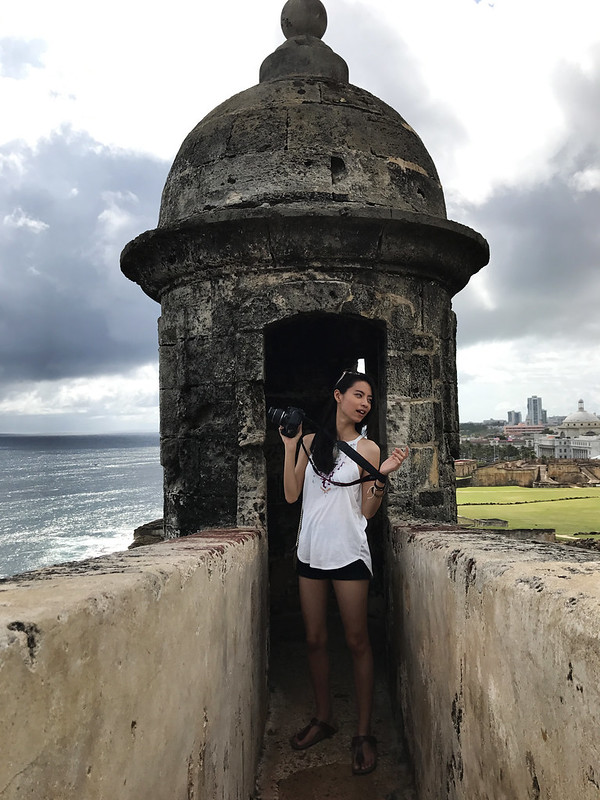 La Fortaleza was one of those places that appeared so many times on our Instagram feed. It wasn’t surprising, for the building is so picturesque, standing at the end of a carless street in its colorful glory. It was a good thing that we visited La Fortaleza on the very first day, because for the next few days the street was closed off to the public. We never knew why. 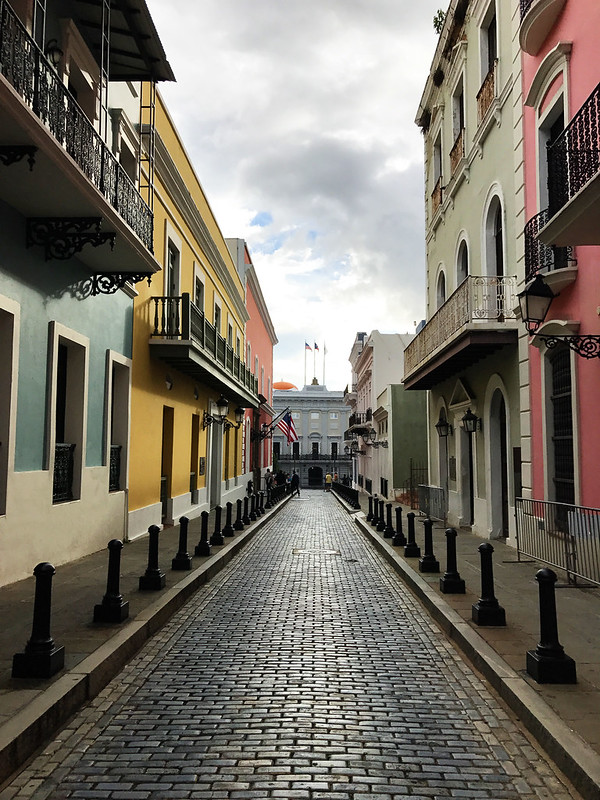 The streets in San Juan were gorgeous. Calle San Jose, Calle Fortaleza, and Calle San Francisco were just some of our favorites. The old city was a maze of colorful walls, flowers, statues, pretty balconies – even a courtyard full of birds! It was fun just to walk aimlessly, letting whatever caught our fancy tell us where to go. 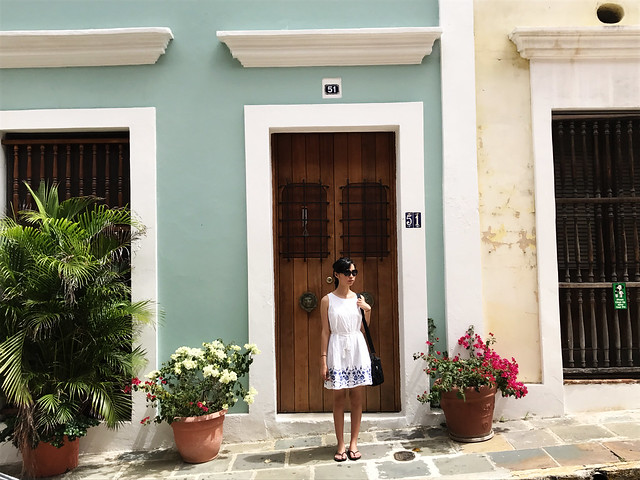 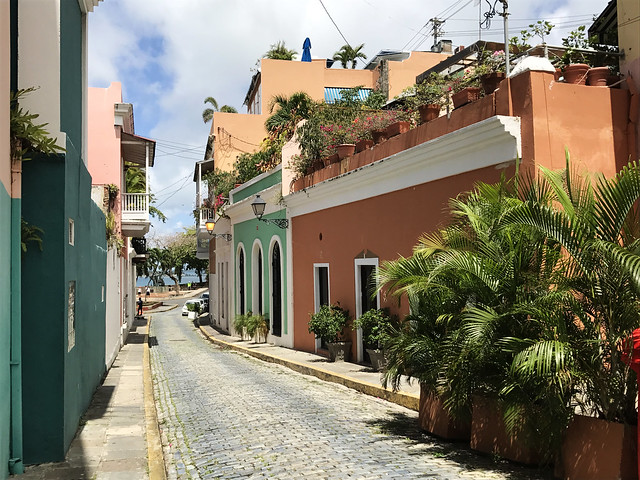 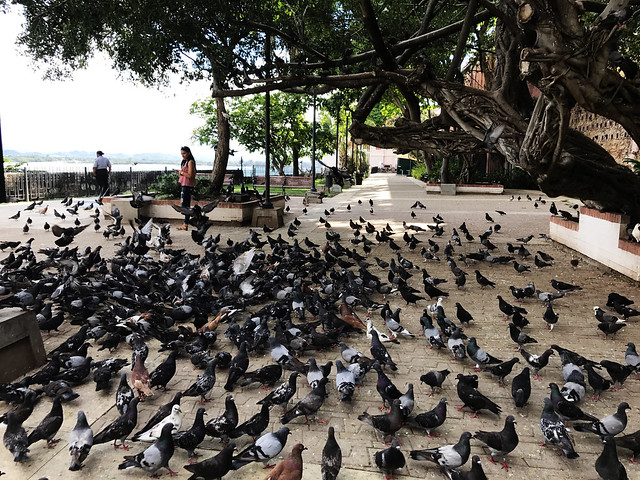 On the third day, we discovered an abandoned building with graffiti and vines growing from its depths. The Puerto Rican flag was painted on the door, but we noticed that it was black and white, different from the colorful photos we had seen of the building. We were just standing there taking photographs when a man and his niece approached us. They told us about the meaning of the flag, and how it was changed to black and white as a protest to the government. 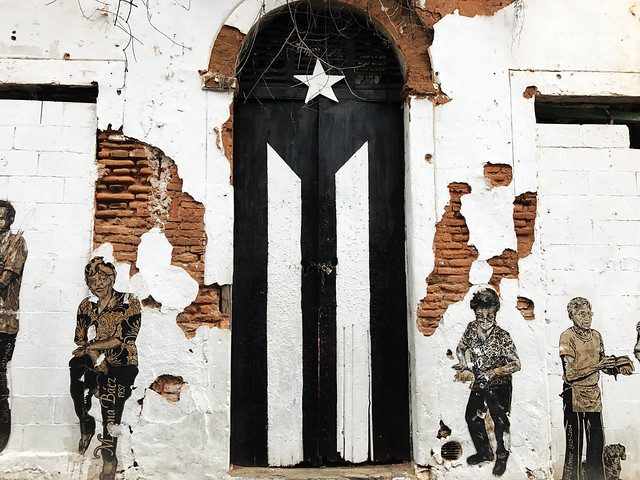 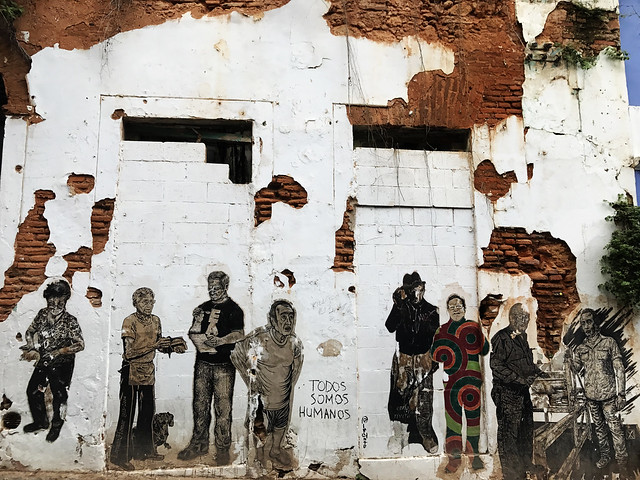 We discovered Paseo del Morro purely by chance. As we were walking around Old San Juan, we noticed a pretty-looking alley that we just had to follow. We ended up getting lost, and it was then that we noticed a stone arch leading to the sea.

The paseo was quiet, with only a few people present. The sea was on one side, separated only by a small strip of rock and sand, while on the other side the fortifications loomed gloriously high. There was a pier jutting out into the clear waters, and from it we could see the new San Juan’s high-rise buildings against the cloudless sky. 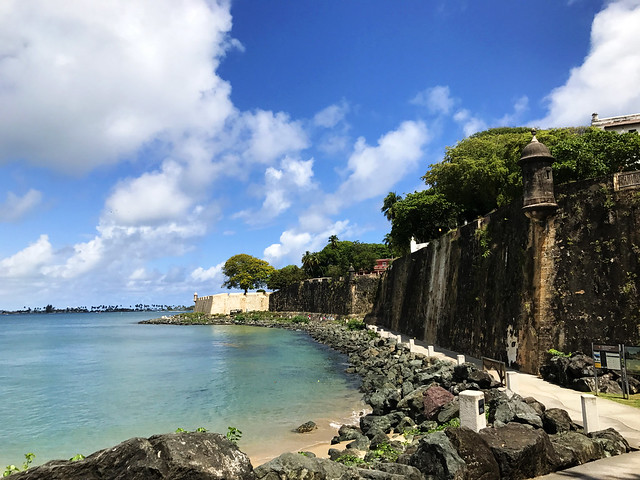 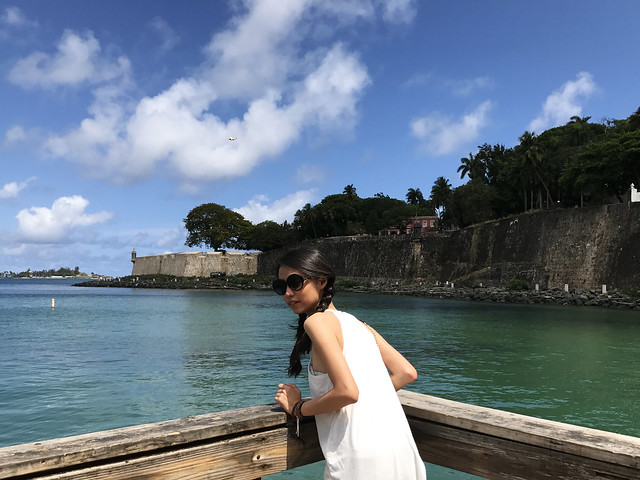 Across the bridge from Old San Juan is Condado, the newer side of Puerto Rico. It features beautiful beaches, rows of shops and grand resorts. 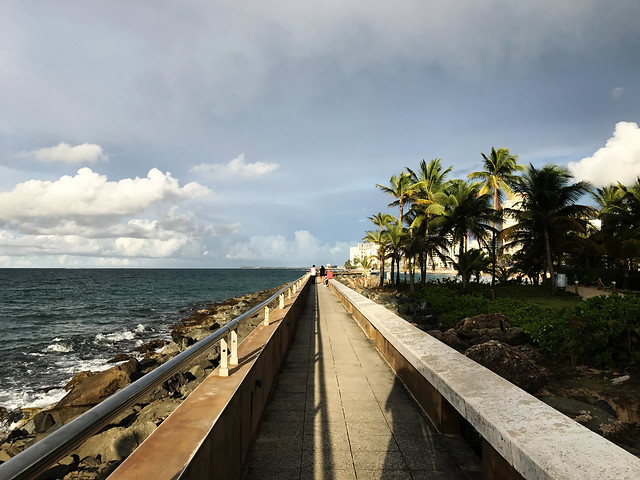 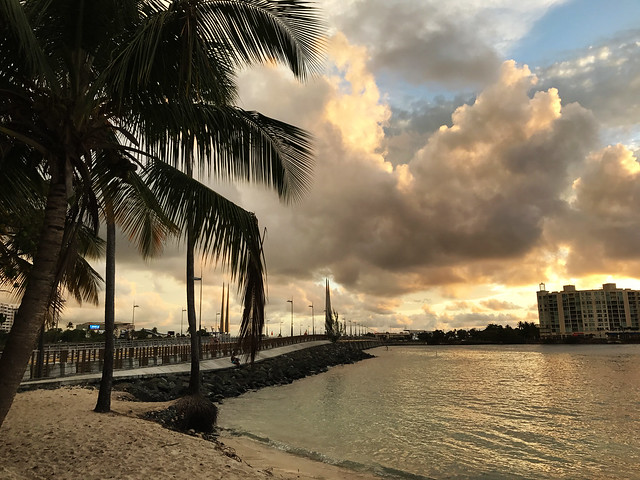 We found a photogenic surfer on our sunset stroll through one of its beaches…watch him take off!

Condado is also home to Plaza del Mercado, market by day and entertainment hub by night (hint: bars, music and dancing equal a really great time). How we found out about it is another example of how listening to the locals’ advice can lead you to unique adventures…on our way to Condado, a taxi driver mentioned how Friday nights at Plaza del Mercado was his favorite pastime as a young man. 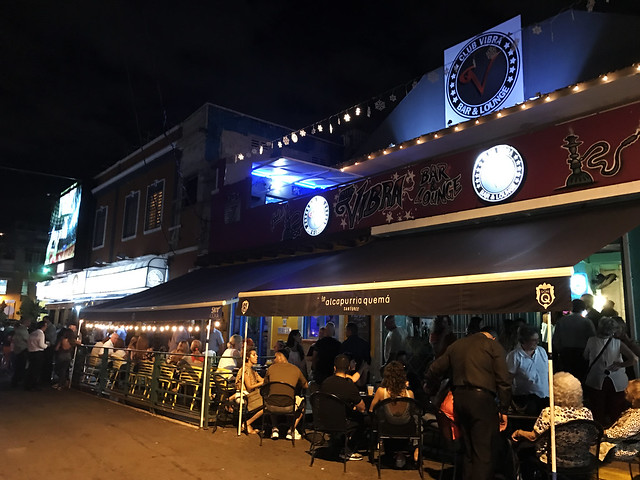 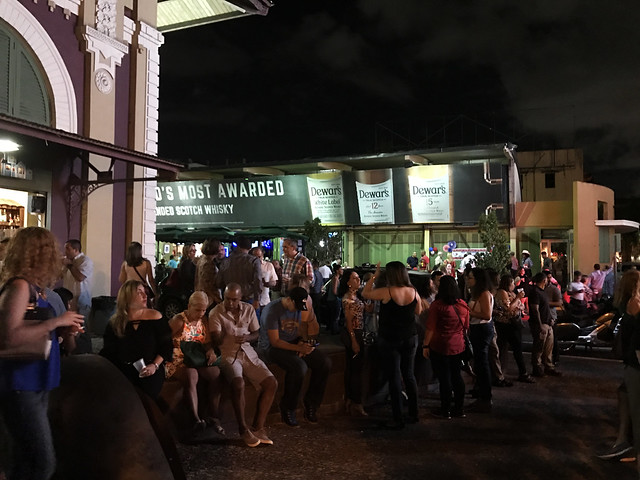 There are so many more things to see in Old San Juan. We visited churches, went to the Plaza de Armas and listened to a man play Despacito on the trumpet, looked at pretty doors, photographed cats, met people, ate delicious food, went to salsa bars and farmers’ markets, and got lost multiple times. San Juan was such a multifaceted and lively city, and it would take us more than just a few days to fully discover its many charms. 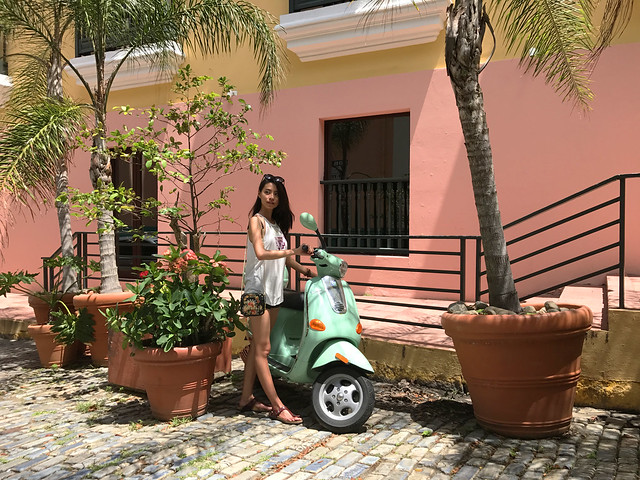 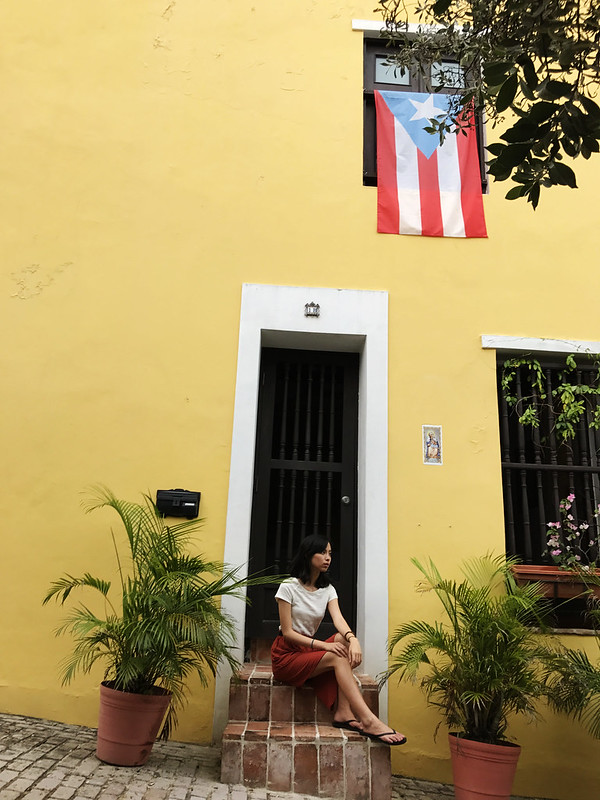 13 thoughts on “On Foot Through Old San Juan”